This is a soundboard recording and the sound quality is very good.

I don't know which show this was recorded for or the exact date but the sound quality is very good.

Very Good sound quality on this one.

Very Good sound quality on these.

Very good sound quality on all these.

Union Carbide Productions from Sweden were another of the great late 1980s bands that made it a great time for rock music. The CGBG show is from a Swedish Radio broadcast and the Hultsfred show is from Swedish television. Both have very good sound quality.

The VPRO is a radio broadcast. The Bielefeld show is a soundboard recording. All very good sound quality.

Here's more Loveslug. These five songs would eventually all be re-recorded and released on the bands final CD Circus Of Values in 1993 but of these recordings only Loser Bar was released in Europe and the USA on a split single with Skinyard in 1991. That split single was Loveslug's only U.S. release.

Before there was Turbonegro, before there was Hellacopters there was Loveslug, from Amsterdam Holland, who were delivering solid slices of Radio Birdman, stooges, MC5 influenced Rawk. These are raw mixes of the songs that would appear on their second full-length LP in 1990. Most of these tracks are instrumental versions and there is one unreleased original track and one unreleased cover song. These two tracks would have made a very nice single had it been possible.  Very good sound quality.

Here's a soundboard recording that was recorded in the halcyon days of Italian Hardcore by the now legendary Negazione. I haven't had time to figure out all the song titles, yet. If anyone can help that would be great.

Both these shows are very good soundboard  recordings.

Readymades were a Power Pop/New Wave band from San Francisco. In 1977 they released a three song 7" ep and in 1980 they released a four song 12" ep before splitting up. This show is a very good soundboard recording.

This one is a radio broadcast and the sound quality is very good.

For the Ramones collector who needs everything ever recorded by them here is a station identification that Johnny Ramone did for the radio station KUSF in San Francisco in 1981. It's less than a minute long. Sound quality is excellent.

These shows are both soundboard recordings. Unfortunately, they both suffer from being a thousand generations away from the original tape so there is tape hiss present. I got rid of as much as I could without wrecking the sound. The Heavy Metal intro on the T-Bird show is just a 13 minute time waste by two members while waiting for the other members to make it to the stage. Very good sound quality.

Rockula were a late 1990s Garage Punk band from Philadelphia. They existed only 6 months in which time they recorded one three song demo and played a few shows. Unfortunately, they never released a record or CD. This show was recorded from the audience and is of good sound quality. 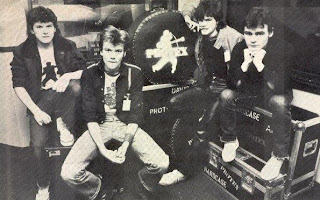 Here's a radio session from Northern Ireland's Protex that has them playing songs which were eventually all released on their singles before they split up. This is from a bootleg record. Sound quality is very good.

Antidote were an early 1980's NYHC punk band that released one 7"ep in 1983. They split up and reformed a couple times before releasing a 12" ep in 1990. Parts of this show were bootlegged on a 7" ep in the year 1990.
This recording is from the soundboard and the sound quality is very good.

Here is a very good sounding radio broadcast from Orchestral Manoeuvres in the Dark playing all their hits and then some. 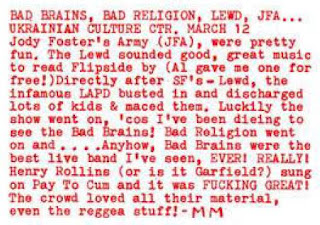 This is a rough audience recording. It's a good set by the early Bad Religion but this one has to be heard only for the L.A.P.D. intro. It gives a small idea of what it was like going to Punk shows in some places in 1982.

Here are some demo songs recorded by Steve Diggle in his home studio one month before the Buzzcocks split up in 1981. These songs feature guitar, drum machine and some vocals. None of the songs are finished and only the song Drift Away apparently ever got released (on a Flag Of Convenience album). These recordings provide insight into the songwriting process and also gets one wondering what a fourth Buzzcocks album might have sounded like in 1981 had they continued at that time.