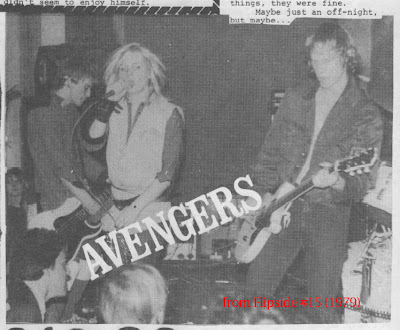 At the end of 1978 original Avengers guitarist left and was replaced by Brad Kent from Vancouver Canada who had been a past member of D.O.A. and a couple other bands.  On all these shows they are playing new songs co-written with Brad Kent. On the Geary Temple show the play the rare song Lonely Girl plus a Velvet Underground cover. The Geary and Mab shows are both audience recordings so the quality is a little rough but still listenable. The Old Waldorf show is a radio broadcast and tracks 3 to 11 have been officially released on the The American In Me CD so you should buy it for the superior sound quality. The sound quality here is good.