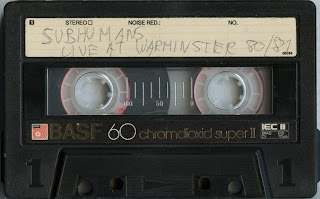 Here is Bluurg Tapes release no. 7 from 1981. My tape was marked Warminster 1980-1981 but as it turns out it is the Demolition War Pts I-III tape with all the tracks being recorded in Warminster in those years. Tracks 1-5 were recorded live and the rest is a rehearsal recording. There are a couple songs that didn't get released back in the day. Track 22 - Song No. 35 was officially released on the Unfinished Business ep which was released in 1998.