Here's D.O.A. live in 1980 from two different shows. The Toronto show is a soundboard recording and is good quality. The White Noise Tour ep is from a bootleg 7" but I don't know where it was recorded. It sounds like it could be a soundboard recording as well. The interesting thing about both these shows is the unreleased song What'cha Doin' (a.k.a. Chuck's New One) and the rare live version of the rare song Suiciding. 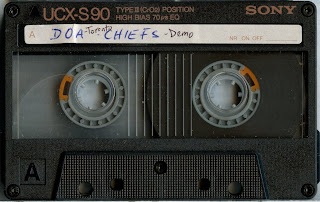