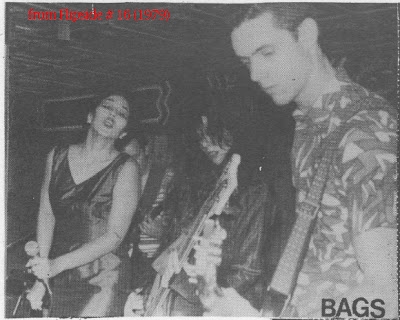 The Bags from Los Angeles were around from 1977 to 1981 and in that time only released a single in 1978 on Dangerhouse Records and had one song on a Dangerhouse compilation LP besides making an appearance in the film The Decline Of Western Civilization in 1980. Until the All Bagged Up album was released in 2007 all the bags we had to listen to, besides the single, was just a couple of live tapes that made the rounds. The Masque show is the only complete set ever in circulation and it was recorded from the audience so the quality is rough but listenable especially for the unreleased songs. The Hong Kong Cafe show is much better in quality and a good listen but still recorded from the audience. The Troubadour show is off of a video and is rough also but still fun to listen to.