Back in 1985 I had a friend in Newcastle England who made this mix tape for me. He didn't supply much information other than to note if the tracks were live, demos or practices so I can't give that info. The Mob songs are from their Ching demo . Part 1 of the Apostles song was released on their 5th ep Smash The Spectacle. Part 2 was on the Mortarhate compilation LP We Don't Want Your Fucking Law!. The version here is the complete uncut song. I don't know if it has appeared on one of their many demo tape releases. I believe the Flux Of Pink Indians demos have been officially released. All the live tracks are from audience recordings. Most of the demo tracks are studio recordings. The sound quality ranges from very good to barely good. Some great tracks here, though. It was geat to have it in 1985 because some of these bands I either didn't know at all had heard only a track or two. 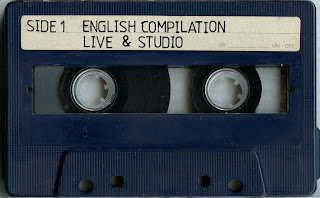 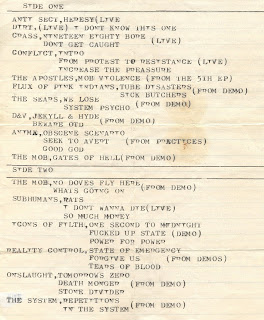 If you like your music inspired by the New York Dolls and Heartbreakers these Jet Boys are for you. They were from Paris France and existed from 1984 to 1994. In those years they released one LP and several singles. This show was recorded from the audience and the sound quality is good though I digitized this about 8 years ago before I knew what I was doing so it is a bit tinny. Unfortunately, I don't have the cassette any longer.