The Normals were one of the first Punk bands in New Orleans and they existed from 1977 to 1979. In 1978 they released their one and only single which a classic of the time. Members of the band can be see in the film DOA - A Rite Of Passage at one of the Sex Pistols gigs. In mid 1979 they moved to New York City but not much happened for them and they soon broke up. In the 1990s a CD titled Your Punk Heritage was released that  featured the single, demos and live tracks. A must have CD. Also, in 2007 another CD was released titled 1978 Recordings and is impossible to find. It's on a Japanese label and is out of print. Here, also, is the Vacation Is For You demo which has different versions of songs that appear on both CDs. 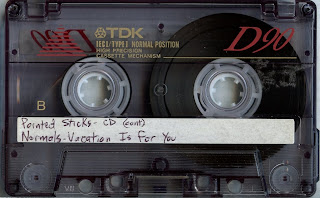 Vacation Is For You demo 1978 [from cassette tape]