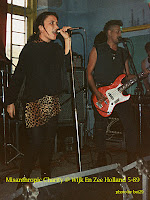 Misanthropic Charity were from Copenhagen Denmark and existed from 1985 until 1989. The band featured Bibbi on vocals and Michael on drums who both had previously been members of Electric Deads. Anders, formerly of Enola Gay, was on guitar and Lars played the bass. In 1986 they recorded and released their one and only LP. After the LP was released Michael left the band and was replaced by Ant (aka Juris) who was the mastermind behind and singer of President Fetch. In 1988 they recorded two new songs which were released on a compilation LP in France (I forget the name of it). In May 1989 they did a tour of Holland with another Danish band, Happy Harriet & The Fallen Men. This live show was recorded during that tour. Most of the songs here were new at the time and because they broke up after this tour they were never recorded in the studio. This is a soundboard recording so the quality is very good.