Social Unrest came from Hayward California and formed in 1979. They had the great fortune of having their first two records produced by Dead Kennedy's guitarist East Bat Ray. Those two records were the only ones to feature original singer Kreetin Kaos who left c.1984. This demo and these live shows feature his vocal talents. The Mabuhay and unknown show are soundboard recordings so sound is excellent, the demo is also excellent quality. The On Broadway show was recorded from the audience and is rough but has three unreleased songs on it. Lots of rare songs on all these recordings. The live unknown show was just two songs someone stuck on the end of a tape. Does anyone know where it is from? I'd like to get a copy of the whole show. 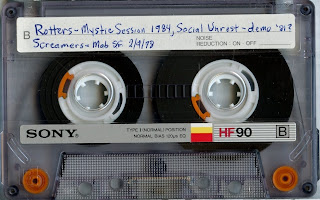 These Blades were from Los Angeles California and were formed by three members of The Outsiders when that band split. The Blades were around for a couple years but only released three songs on the Someone Got Their Head kicked In compilation LP on BYO Records in 1982. They did get plenty of press in Flipside Magazine, though.