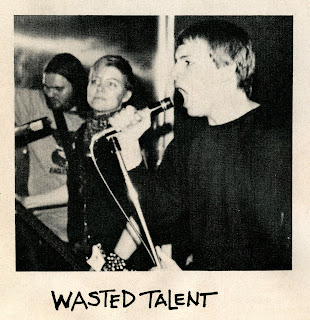 Wasted Talent are another great Pennsylvania band that are not that well know. They were from State College PA and existed from 1981 to 1984. In 1983 they released a cassette album. Three songs from that tape were included on the Master Tape volume 2 compilation LP released in 1983. After the band split drummer Mick moved to Philadelphia and was a member of the band Oblivion who recorded one demo and bassist Greta moved to Richmond Virginia and was a member of Unseen Force with ex-members of White Cross. Wasted Talent are mentioned in the book American Hardcore and have a short interview piece in the America hardcore film. Today Mick is a respected poet with several books in print and Greta is a respected bass guitarist having played with Moby, Debby Harry and many others.