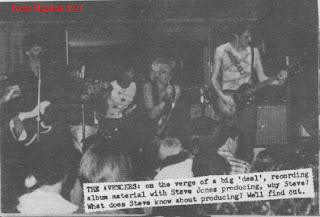 Here's three more Avengers shows from 1978. I only have these two songs from this Mab show and have never been able to track down the complete show. The Whiskey show is a little special because it has the rare songs Night Ride and Flames Of Evil plus an Eddie Cochran cover and also an extended jam on I Want In. The song Flames of Evil is the same music as the song on the Died For Your Sins CD titled Something's Wrong but with different lyrics. The Aito's show is also special because of some rare songs. On October 23, 1978 The Avengers were in the studio recording 4 songs with former Sex Pistols guitarist Steve Jones. Out of that collaboration The Avengers added two Steve Jones songs to their set - Second To None (recorded by The Professionals as 1,2,3) and Lonely Girl (recorded by Steve Jones and Paul Cook as Lonely Boy for The Great Rock 'n' Roll Swindle soundtrack). And, there is also the mystery track Promised Land. All three shows were recorded from the audience but the sound is good on all of them.