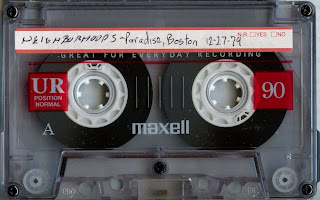 Before the Neighborhoods were famous they were just another band from Boston slugging it out in the clubs of that city. In 1979 they released a now classic single. Their next release wasn't until 5 years later. They eventually released 4 albums and one 12" ep. This live show was recorded not too long after their first single was released and both songs are played along with some that never got released at all. This is either a soundboard recording or radio broadcast and the quality is great.