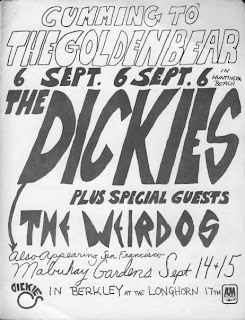 The Weirdos are my favorite American Punk band so I thought I'd do a big Weirdos post. They existed between 1977 and 1981 and in that time they released only two 7" singles and two 12" ep. It wasn't until 1989 when they regrouped that they finally released an LP. It is unfortunate for the world of music that they did not get to release an LP in 1978 because it would have been a treasured classic. They certainly had the songs for it. The rehearsal and the Whiskey show have been bootleged up and down the world but thought I'd put them up anyways. The Gold Bear show has one song I can't title. Anyone know it? This version of Barbaric Americana is the same one that is on the Weird World vol. 2 CD. These Condor rough mixes are much better here than the final release.